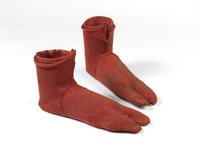 Knitting has always been a big part of my life. My mother taught me to knit from a very young age, just as her mother taught her, and so on. This cycle is seemingly endless and extremely common amongst families of knitters. But where did originate? How did it spread? This project aims to unravel the origins of the craft of knitting, tracking its changes in technique and form until the 19th century and the introduction of industrial knitting machines.

The overall collection begins looking at the earliest examples of knitted history from ancient times in an attempt to explain how the craft originated. These examples start with the Early Christian Era with a technique called Nålbinding (sewing stitch). Nålbinding is more akin to sewing or basketry, but the finished stitch closely resembles knitting. It uses a single flat needle with large-eye at one end or in the middle, and a working thread is passed through loops held by in the left hand. Still seen in rural areas today, Nålbinding is popular in Scandinavia and women of the Nanti Tribe in Peru.

The introduction of a second needle (without an eye) serves as the basis for the modern plain or knit stitch. These pieces are worked flat and seamed together to create circular forms. During the European Dark Ages, knitting moved into present-day Europe from North Africa with knitted items reserved for the clergy and wealthy patrons. During this time, there was the introduction of knitting in the round with five needles (a method still in use today). Now forms for socks, hose, gloves, and sleeves could quickly be done by hand. Manipulation of yarn and various stitches (depending on working flat or in the round) allowed for the creation of beautiful clothes and accessories.

With a high value was placed on knitted items, the craft became a source of pride for men and guilds for master knitters started to form in Europe about the 1400s. The driving force behind these guilds was not only to evolve the artistry fo knitting, but also to improve the quality of knitted pieces and drive up the value to attract a wealthier clientele.

Knitting continued to be a sought after skill and defined communities in Scotland, France, Scandanavia, and throughout Eastern Europe. With the introduction of the knitting frame by William Lee in 1589, hand-knit items began to witness a small decline as it was now easier to achieve the same look (albeit varying tensions) much faster. However, it wasn’t until the introduction fo the stream powered, industrial knitting machines, hand knitting began to sink back into the homes no longer playing a significant role in the knitting industry.

Now a stable of home life, I posit that hand knitters (modern and historic) produce a quality far superior to those machine knit objects. Maybe it’s the extra love within each stitch...