A Brief History of Blue 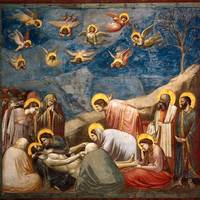 The items in this collection outline the major moments in the history of the color blue. The Lapis Lazuli rock, one of the first uses of the color blue, was heavily used by Egyptian cultures. After the discovery of the indigo dye, blue was first used as a pigment by the Mayan Empire. Because of the color’s rarity, it was used sparingly in paintings, reserved only for depictions of royalty and of religious significance. As it grew in popularity, a synthetic pigment was soon created, and its symbolism and significance changed drastically. In Picasso’s famous Blue Period, all of his paintings took on a much more sullen and depressive nature. During this period, he painted morose and closed off subjects sadly playing a guitar or sitting with their arms folded entirely in shades of blue, using the color’s natural inclination towards sadness. Yves Klein, a pioneer of blue, went to the lengths of inventing his own shade, IKB, for his monochromatic works. His intention with this vibrant, electric blue was for it to encompass everything. All emotions, all feelings, all images of the deepest sea and the unknown reaches of the sky. In Felix Gonzalez-Torres’ work, “Untitled (Blue Mirror)”, he uses the color in a similar fashion as Klein. His blue became a self-reflective color, easily denoting diverse feelings and emotions of sadness, distance, hope, and joy. In short, it is now a completely neutral color that can be molded by the artist and the viewer alike.

This collection contains a wide variety of objects, mediums, artists, and time periods. The earliest object is found in 945 B.C. and the most recent created in 1999. The objects and mediums range from clay statues, oil paintings, ink drawings, cyanotypes, paper collage, and ballpoint pen on canvas. The artists are made up of both men and women.

I made this collection surrounding the history of blue and its symbolism because I find it to be the most fascinating of colors. It began as a highly sought-after color due to its rarity. It was reserved exclusively for depictions of sacred beings, such as the gods Vishnu and Krishna, and the Virgin Mary. As it grew in its availability, the symbolism changes. Blue underwent a transformation along with the changing societies around it. It was no longer held only for the rich, but available to all classes and economic standings. It became the color of sadness, loneliness, and distance. It became the color of the unknowable. This, in my opinion, is also the reason why it is so frequently tied to femininity. Women have become symbols of deep seas of emotion and feeling. I keep Matisse’s “Blue Nude II” in mind when I think of the connection between blue and feminism. When I see this work, I see blue of distance and the blue of depth within each woman. Similarly, Yves Klein’s relationship with the color blue was to emote the feeling of the infinity, of the all-encompassing. This, along with Gonzalez-Torres, relied as much on the viewer to bring their own infinity into it, to fill the blue void presented to them. The history of blue symbolism can be boiled down to a sense of the ethereal, of the unknown, and of the infinite. 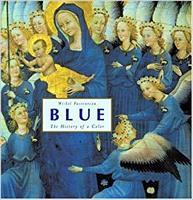 "Blue: The History of a Color" by Michel Pastoureau

"On Being Blue: A Philosophical Inquiry" By William H. Gass

"A Field Guide to Getting Lost" by Rebecca Solnit