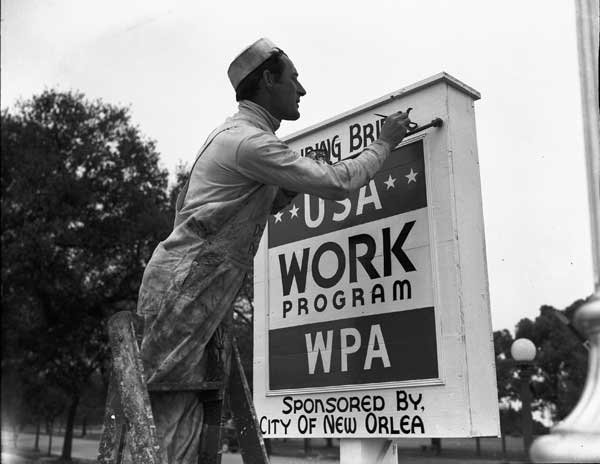 The Works Progress Administration (WPA) was one of the largest and most ambitious federal agencies created by Franklin D. Roosevelt as part of the New Deal. From 1935-1942, the WPA employed millions of Americans throughout the country as a means of ameliorating unemployment and poverty caused by the Great Depression. Eligible skilled and unskilled workers were deployed nationally as a means of revitalization, creating municipal parks, paving streets, erecting federal and state buildings, installing community pools, and much more. Although they received less federal funding compared to other states, the south greatly benefited from WPA efforts. This is especially true in Louisiana, where WPA employees simultaneous preserved and added to its rich cultural history through the building of archives, municipal projects, beautification, large-scale documentation efforts, transcriptions of historical documents, bookbinding, and archeology.

The images on this website were scraped from the New Orleans Library WPA Collection and from Yale's Photogrammar project, which draws from the Library of Congress United States Farm Security Administration and Office of War Information (FSA-OWI) photo archive. The scraping programs, written in Python and using Beautiful Soup, are available on the project's GitHub repository. Images on the project Omeka site are arranged in two main collections, the Farm Security Administration (FSA) and the Works Progress Administration (WPA). The FSA collection is arranged by photographer and the WPA collection is arranged into themes—Recreation, Education, Public Health, and Libraries. Both collections offer insights into the lives of everyday people in the city during the New Deal as well as record of the types of projects carried out by the WPA.

This website was made by Genevieve D. Milliken for Matt Miller's Programming for Cultural Heritage course taken in Spring 2019 at Pratt Institute's School of Information.