Biomorphism's sculptural treatments also adopted Constantin Brâncuși's practice of Direct Carving, a process that emphasized the interaction with the raw material itself, as the grain, texture, and color shaped the final work. Additionally, his biomorphic shapes as seen in his Portrait of Mademoiselle Pogany (1912), where the head takes on an egg-like shape, also evoked a shell folding in on itself in curvilinear planes resonated with the later Surrealist movement.

Biomorphic sculpture emphasized the practice of Direct Carving and using the material's grain, texture, and density to energetically shape the artwork. As a result, wood, marble, and local stones were often preferred materials. Since Direct Carving involved intense engagement; many of the final pieces expressed an intimate involvement that connected the work to the artist and viewer's subconscious. Sometimes created on a small scale, the organic forms, resembling shells, stones, or small living creatures, could be held and rearranged by the viewer with the result that they evoked ever more associations, as seen in Hans Arp's pioneering works like Sculpture to be Lost in the Forest (1932). Barbara Hepworth and Henry Moore's biomorphic forms emphasized a correspondence between the human body and the natural landscape. Hepworth pioneered "piercing" the form with empty space so that the holes would lend themselves to both abstracting the human form while also suggesting eroded landforms. Many of the Biomorphic artists developed a signature visual vocabulary, as seen in Miró's preoccupation with birds, the sun, the moon, and personages (unidentifiable but humanoid figures), or Isamu Noguchi's interlocking sculptures like Kuoros (1945). By the 1950's Arp, Miró, Karl Hartung, and Moore were creating a great many public sculptures, cast in bronze, as seen in Arp's Cloud Shepherd (1953), or in concrete, as seen in Miró's Dona i ocell (Woman and Bird) (1982). 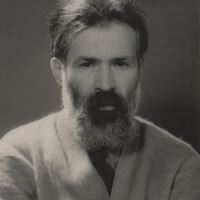 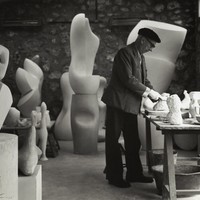 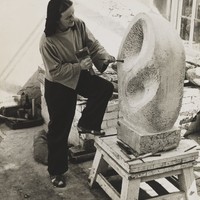 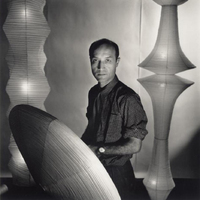