Skip to main content
“Maps codify the miracle of existence.”

Nicholas Crane, Mercator: The Man Who Mapped the Planet

This collection assembles works by contemporary artists that have, in various ways, involved cartography and the use of maps. The symbolic nature of maps is multifaceted, involving coded meanings that are simultaneously cultural, societal, and political. The varied scales of maps also point us to geo-political issues addressed in the area — a nation, a continent, or the entire world. Maps, since the early era of contemporary art in the 1960s, have become a frequent source of imagery as symbolic vehicles for artists to address different issues. The earliest work selected here is Map (1961) by Jasper Johns, who employed energetic strokes to paint a map of the US. The still recognizable yet blurred borders between the States as well as the use of stencil for the name of each State manifest the homogenization and industrialized mass-production that prevailed the US society then. Later in the 90s, Chinese artist Hong Hao sourced the stylistic elements of maps produced in different times of Chinese history, and added texts, geographic elements, sometimes even deliberate misnomers to play with the visualized world and the reality. With such techniques and thinking, Hong offered his commentary on global politics in the post-Cold War era from an Eastern perspective. When it comes to more recent times, Vietnamese American artist Tiffany Chung has centered her art practice on mapmaking. One of her most recent works included in this collection, Reconstructing an Exodus History: Boat Trajectories in Asia illustrates the routes that groups of Vietnamese refugees, commonly referred to as the boat people, took to migrate out of Vietnam in and after 1975. Chung’s artistic recreation reminds us that maps, while often regarded as an informational sheet, also contain an organic nature that resonates with the lived experiences of people. This collection, therefore, aims to showcase how different artists utilized maps as readymade materials, invented new ways of visualizing geographic information, and explored the artistic possibilities with maps and cartography. 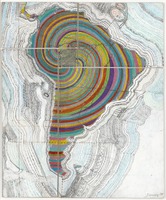 Juan Downey, Map of America, 1975, Colored pencil, pencil, and acrylic on map on board. Collection of The Museum of Modern Art.

This collection contains artworks dated between 1961 and 2017, in the span of nearly sixty years. Five male artists and five female artists are included, and among which seven are living artists. The works presented here engage with various mediums and broadly fall into the categories of painting, sculpture, works on paper, textile, installation, and media art. The original works currently belong to multiple museums (The Museum of Modern Art, National Gallery of Art in Washington DC, Samek Art Museum at Bucknell University), galleries/artists, and one private collection. 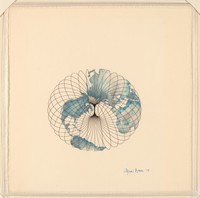 I decided to compile this collection because I would like to explore this particular subject matter that interweaves contemporary art and maps, two topics that both interest me for long. The presence of maps naturally brings out an emphasis on geography, and to echo with that, I intentionally selected a diverse group of artists from different countries to represent a global take on this theme. That being said, some of the narratives emerged in the artworks also echo with the personal narratives of the artist. By using maps in different ways or creating new ones, the artists present their political voices in both the private and public realms. Below are links to several major exhibitions that surveyed the topic of cartography in contemporary art in recent decades.